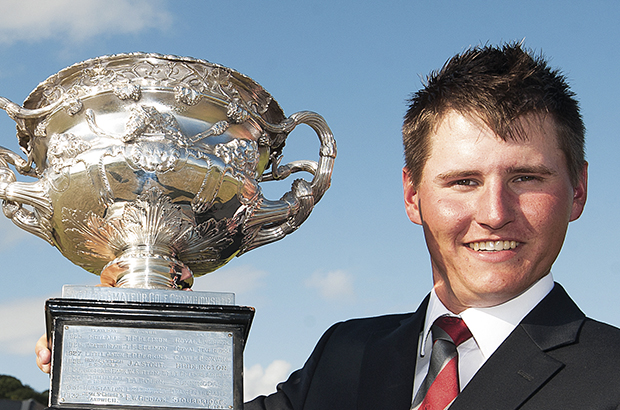 NICK MARSH is the 2014 English Amateur champion. He resisted Scott Gregory’s battling qualities to take the title 2&1 on a blustery afternoon at Saunton.

The 19-year-old from Yorkshire was, for many, the favourite to lift the title and was never behind for the 35 holes played. But he was made to battle it out in front of a large and appreciative crowd before landing the biggest prize in English amateur golf.

The end came on the short 17th when, with Marsh needing just a half, Gregory conceded after his chip from left of the green hit the cup, while Marsh left his birdie putt close.

“Wow, what a match,” said Marsh.  “It was a ping-pong tussle with both of us winning holes at different times but to get this title is unbelievable.

“It means everything to me. I’ve been knocking on the door for some time. I’ve come close twice, in the Scottish and Portuguese Amateurs, and to get over  the line at last is amazing.

“At the 17th, I hit the best 3-iron I’ve hit  all week. When Scott hit his tee shot left of the green, it opened the door for me but I still had to get the job done.

“I could have rolled in a couple more putts, which might have got the job  over sooner. At 12 and 14 this afternoon,  I didn’t get up-and-down but it came  right in the end.”

Gregory, just a month younger than Marsh, began the week well down the amateur ranking. However, he has put himself on the national golfing map with what he has achieved and seems set for greater things.

“I’m very happy for what I have done this week,” he said. “I kept fighting back. I never gave up but Nick played really well, he’s a great champion and it was a pleasure playing with him.

“I expect most people expected him to win but I gave it my best shot and I’m happy with the way I performed. Today, I showed I can play well under pressure and now I’ve got to push on to be one of the best in the country.”

One-up at lunch, when he probably should have been further ahead, Marsh pushed on in the afternoon, winning three holes in four from the second where he chipped-in for an eagle-three. That run included a birdie at the fourth and, at four-up, he seemed to be sailing to victory. But Gregory knew differently.

A 20-foot birdie at the sixth followed by a winning par at the next cut the deficit in half before Marsh replied with a birdie of his own at the eighth. When Gregory air-mailed the green at the par-4 tenth, the lead was back to four but again Gregory wouldn’t lie down.

“When I went four-down for the first time, I knew I still had plenty of holes left,” added Gregory. “I wanted to put Nick under pressure and I did the best I could. Nick was the better player on the day and deserves the title.

“I thought my chip on 17 was in but it wasn’t to be. Still, I’ve had a great week. There are things I need to work on but I can go away happy with what I’ve achieved.”

For Saunton meanwhile, this was the club’s fourth time hosting the English Amateur, having previously staged it in 1937, 1993 and 2001. Next year’s tournament will take place at Alwoodley in Leeds, which has only ever staged the event once before, in 2003.