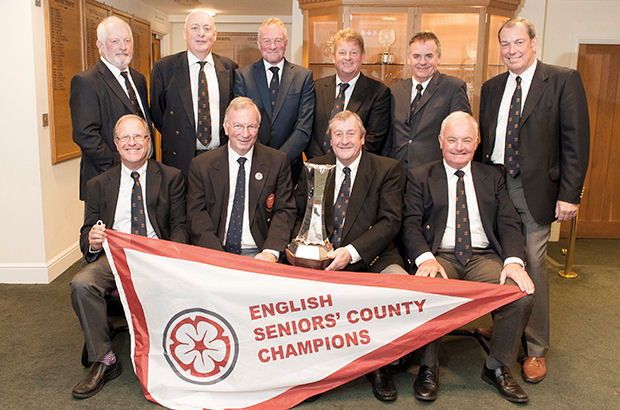 LANCASHIRE were crowned English Senior Men’s County Champions for  the first time after a storm-hit, disrupted and shortened final day of a difficult week at Hindhead in Surrey.

Having gone into the final  day on level terms with defending champions Kent,  both counties having claimed two victories, everyone was eagerly looking forward to a fitting climax. But it wasn’t to be.

Although the foursomes were completed, albeit with a ten-minute suspension for thunder in mid-morning, the singles were delayed. Some were started but, after a further delay for lightning and several heavy downpours, play was abandoned.

That meant, according to the championship conditions, that the six singles were declared halves which meant Lancashire won 5-4 having edged the completed foursomes 2-1.

“I’m delighted and proud that we have won this title at last,” said Lancashire captain Stuart Fawcett. “However, I’m disappointed that we didn’t manage to get the six singles away because I would have loved to have won it in a full match on the course.

“But, after five or six years of trying and never managing to pull it off, it is great to be champions at last. My team has been as one. They have supported each other and all played their part. I know how Kent must feel, as we were in the same position last year.”

Kent captain Mark Singfield said: “It’s disappointing for us. Sometimes you are on the right end of a rules decision and sometimes you are on the wrong end. We wouldn’t have chosen to go into lunch 2-1 down but we were looking forward to a very competitive afternoon. In the end, the weather won. But I  offer my congratulations to Stuart and his boys.”

In a week of poor weather, with frequent heavy rain and strong winds, it was a shame the climax of such an important event should be handicapped in such  a way.

Lancashire’s victory in the foursomes proved crucial in the end. They were indebted to Terry Brown and Glyn Rees, who beat Ross Galgut and Phil Bramall 4&3, and to Alan Gillespie and Jeremy Morgan, winners by two holes against David Weighton and Bruce Hilsdon.

In the third-place match, Gloucestershire and Nottinghamshire shared the foursomes 1½-1½ and, despite starting some of the singles,  they also fell foul of the  weather. So, it was agreed that all would be declared halves, which meant their overall  match was tied.