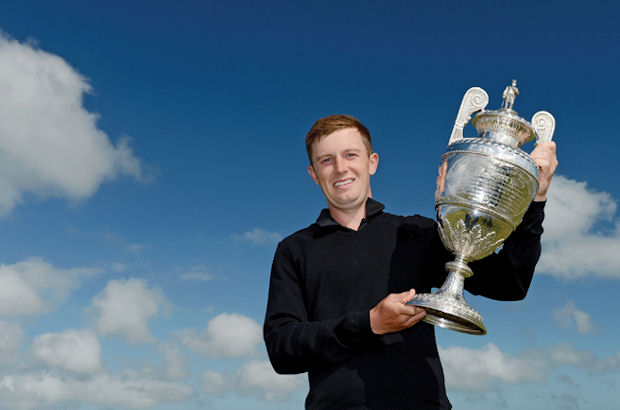 GARRICK PORTEOUS is English golf’s man of the moment following a stunning recent double win. After claiming the Scottish Strokeplay Championship at Southerness, the Bamburgh Castle ace then became the first Englishman to win the Amateur Championship since Gary Wolstenholme in 2003 with a thumping 6&5 win over Finland’s Toni Hakula at Royal Cinque Ports.

Those two triumphs propelled the 23-year-old into the top 50 of the World Amateur Golf Rankings and all but sealed his place on the GB&I Walker Cup team that will try to defend the trophy at the National Golf Links of America in New York this autumn.

His win at Royal Cinque Ports has also ensured Porteous of an invitation to three of golf’s four men’s majors. As well as this year’s Open Championship at Muirfield, he can look forward to competing in the Masters at Augusta National and the US Open at Pinehurst next year, assuming he doesn’t turn pro before then. The enormity of his Amateur victory was not lost on the Northumberland golfer.

“It’s quite a surreal feeling right now,” he said. “I know there are a lot of famous names on that trophy. To be alongside them is pretty humbling. I felt confident coming into the week but I never got ahead of myself. I just played one shot at a time and it worked.

“I think it will hit me when I realise I will be playing in the Open. It is just over an hour away from my house so there will be a lot of local fans coming out to watch. I played Muirfield four years ago in the Amateur and it will feel pretty special to tee it up there in the Open.”

Porteous’ win ended English golfers’ recent run of bad luck in what is arguably golf’s most high-profile amateur tournament. Since Wolstenholme’s victory over Raphael de Sousa at Royal Troon in 2003, four players - Lee Corfield (2004), Adam Gee (2006), Tommy Fleetwood (2008) and Sam Hutsby (2009) - have been on the wrong end of a defeat in the final of the championship. However, Porteous buried that hoodoo in emphatic fashion to claim England’s 49th victory in the 118th edition of the event.

Such an outcome must have seemed a distant proposition for the Teneessee University graduate after he opened with a 77 in the strokeplay qualifier. A second round 69 redressed the balance and he made it through to the matchplay stages in a tie for 30th.

A 3&2 win over Cormac Shavlin from Ardglass saw him safely through to round three, where he dispatched another Irishman, Greystones’ golfer Paul Dunne, by the same scoreline.

In the last 16, Porteous racked up another 3&2 win, this time over Frenchman Paul Barjon, before he ended the interest of his fellow Englishman, Neil Raymond, in the quarter-finals, 2&1 the score.

That earned Porteous a place in the semi-finals and a head-to-head with US golfer Jim Liu. A tight match was predicted and so it proved, with Porteous edging it at the 19th hole to set up a final tussle with Hakula, who had denied North Foreland’s Max Orrin in the other semi. The Finn ran out a comfortable 4&2 winner.

As if playing a 36-hole final at the end of a long week wasn’t tough enough, Porteous and Hakula also had to contend with fierce weather conditions on the Kent coast.

Although Hakula got off to a good start, winning with a par at the first, it was Porteous who adapted better to the inclement weather and he began to assert his dominance, winning four holes in a row from the sixth, all with pars. Leading four-up at the turn gave the Englishman an important cushion for the challenging back nine playing into the wind.

Hakula won the tenth hole, after Porteous hooked his drive and lost his ball, 12th and 16th holes to reduce the deficit to one hole but the Bamburgh Castle man stopped the rot by holing from 15ft to win the 17th and then the 18th after Hakula found the thick rough on the left from the tee.

Starting the afternoon round with a three-hole cushion, Porteous slipped up at the 20th hole but a par at the 21st was enough to stay three-up. A birdie at the 23rd took Porteous to four-up and, from there, was just no way back for the Finn.

A birdie on the 28th hole saw Porteous five-up and, although Hakula took the next with a birdie-three, the Englishman was in control and a bogey on the 31st was enough to seal a 6&5 victory.

The seeds of that win were planted in the Scottish Strokeplay Championship, which was played in similarly tough conditions at Southerness, in Dumfries & Galloway. Porteous became the third English winner of the prestigious title in the last five years when he romped to a four-shot victory.

Leading by one shot going into the final round, he drew on his experiences of finishing second at the Welsh Strokeplay earlier in the year to close out the win with a fine 68 for a one-over-par total. 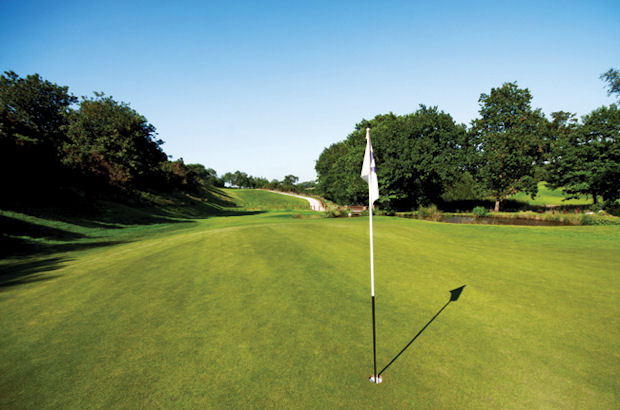 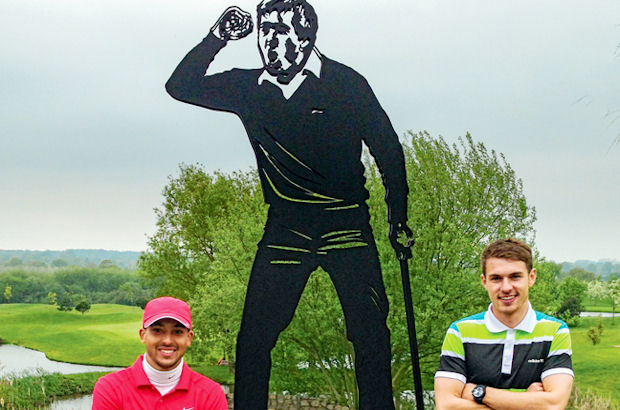