Defending champions England produced a commanding performance to beat Spain 17-13 in a two-day mixed international and keep a firm grip on the Seve Ballesteros Trophy.

The win, at El Saler Golf Club in Valencia, was England’s 15th in the biennial series. Spain have taken the trophy on just two occasions, most recently in 2013.

Nigel Edwards, England Golf Performance Director, remarked: “We are delighted with the victory against Spain on such a great golf course as El Saler. This was a wonderful effort by everyone and all contributed to a wonderful win.”

The team made their intentions clear from the start when they won the opening foursomes session 4-1, with the points scored by Scott Gregory/Jack Singh Brar, Bradley Moore/Alfie Plant, Dan Brown/Marco Penge and Sophie Lamb/Gemma Clews.

The hosts came back strongly in the afternoon but the singles were shared 5-5, ensuring England maintained a three-point lead at the halfway stage.

On Sunday, the Spanish had the upper hand in the foursomes, winning the three men’s games, but the pairings of Lamb/Clews and Georgia Price/Louisa Brunt delivered their points to keep England ahead and give the team an 11-9 advantage with the ten singles still to be played.

Needing just four more points to retain the trophy, and four-and-a-half for an outright victory, they set off at a terrific pace towards the target.

Lamb, the British Strokeplay champion, won her game 6&4. She was quickly followed by Brunt, making her debut at this level, who defeated her opponent 5&4. English Amateur champion Dan Brown added another point with a 6&5 win.

Price, also new to golf at this level, ensured England could not be beaten when she won her singles on the 18th and Clews secured the trophy with a halved game. The remaining games on the course were tightly contested and Plant won on the last, while Penge halved to complete the victory.

England’s top scorer was Sophie Lamb, with a perfect result of four wins from four games. Gemma Clews was also unbeaten, amassing three-and-a-half points and extending her own remarkable personal record. She also played in this match in 2015 when she won all her games. 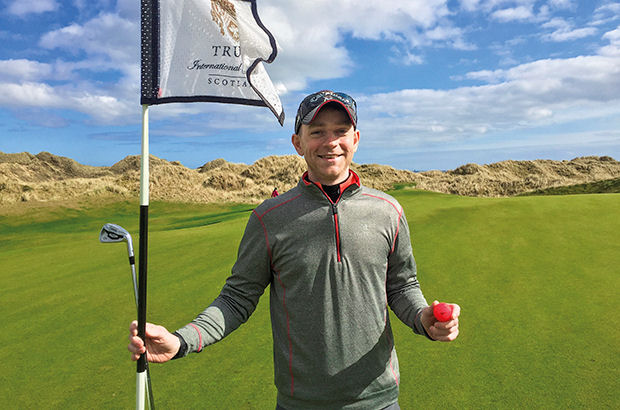